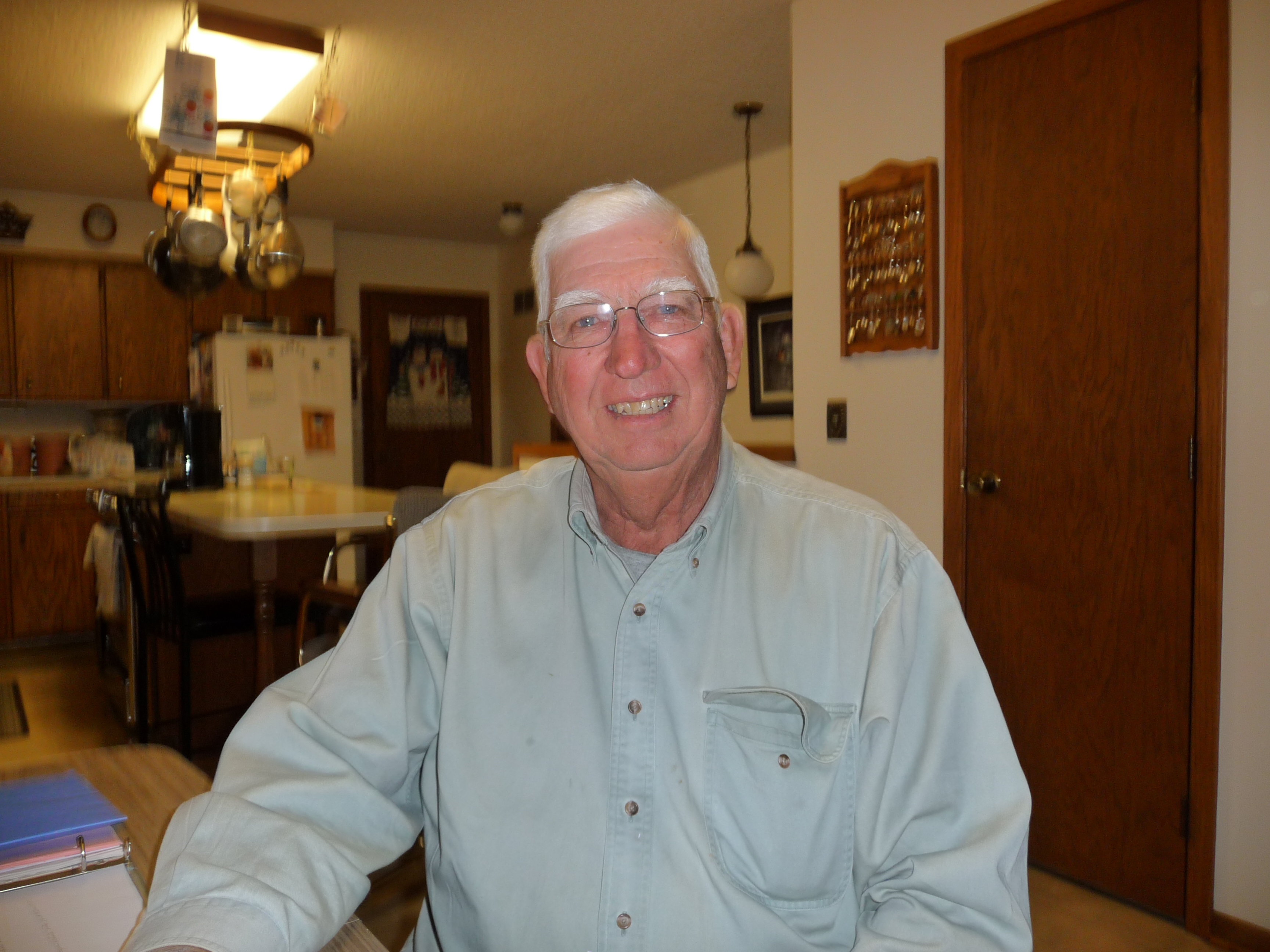 First, Gerald, I'm going to ask you to just give a little background of what your life's been like and what you've done with your life, not a whole lot of details, just general.

MR. ROYAL: Well, this is where we grew up. This was our home place, and I was born in 1940. My dad was farm -- he bought this farm in 1950. And he was always really interested in conservation work and the flooding, because the farm he bought here where we live on now was in a flood plain, a lot of it. It would flood about every year. Almost every year, we would get flooded out and we'd have to replant, sometimes twice. And so, he was real interested in watersheds. He was instrumental in forming the Upper Little Nemaha Watershed. And they tried for years to fund it by the federal program, but they didn't have any luck getting funding federally. And Don Larson was really instrumental in getting State funding for this Upper Little Nemaha Watershed, which we're really thankful for, because when Don got that done for us, we could move ahead and we constructed 18 flood control structures in the Upper Little Nemaha. And that's something that really, we haven't had a flood since then that's flooded us out. So, it's been a real privilege to be part of that. And that's, I guess, that's about all I know.

MR. STARR: And I think you told me, I was going to ask you, though, how long was your father on the Nemaha NRD Board?

MR. STARR: I remember Herman was one of the original folks on the board, but -- who we worked with. Were you very aware of the -- at the time of the opposition to the NRD law and what the opinion of some of the local people were, including your father?

MR. ROYAL: Well, just kind of what Dad had said and things, you know. I was young enough that we weren't really, I suppose, that interested in to know for sure what was going on then, but as time went on, I remember some of the comments and problems that were involved and some of the people that were involved in these special purpose districts that were opposed to that. And so, I learned more after -- later on than I did at the present time -- or at that time, I guess.

MR. STARR: What was your father's position? Where did he come down?

MR. ROYAL: Oh, he wanted it so bad. This was his thing. He wanted to get that watershed put in here.

MR. STARR: Do you remember any of your father's comments or reactions of the NRD Board and the whole operation when he first -- when that whole thing got started?

MR. ROYAL: Oh, I really don't know any -- remember anything particularly, just that he was always talking about it and was real enthused about it.

MR. STARR: When were you on the board?

MR. ROYAL: Well, I guess I was really impressed with their attitude and their dedication to conservation. And they were just like a bunch of old grandpas to me. They treated me really well and I really liked it.

MR. STARR: What about the activities that you were -- the board was involved in, what the things they were doing? Was that any surprise to you or were there some things, you know, golly, this is not something I knew they were doing?

MR. ROYAL: Well, no, because I was pretty well up on what was going on from what -- Dad always kept us pretty well informed, and we were always interested in -- that's the only thing I ever wanted to do was farm and be involved. And we always wanted to make -- leave the land better than when we got it and we still feel that way.

MR. ROYAL: No. The only thing, not at the first. When I first got on, there wasn't. But later on, I got to wondering why we have to deal with so much recreation. And that kind of bothered me. I thought it should have been kept more for conservation.

MR. STARR: I think that was pretty much the general attitude in this part of the state.

MR. ROYAL: Yeah. But I can understand, too, that people are paying taxes towards the NRD and that they deserve some return, too.

MR. STARR: Who was the manager when you first got on the board?

MR. STARR: So, you didn't really know him very well?

MR. ROYAL: Well, I knew him because he'd been up here, talked to Dad different times and things. And then he started this Tree World out here west of Palmyra.

MR. ROYAL: And that's where I got to know him best was up here.

MR. STARR: Yeah, it wasn't too far from here.

MR. STARR: He was the manager for a while before Don.

MR. STARR: He was a retired SCS employee, and he was what they called area conservationist in southeast Nebraska, I think. He was retired.

MR. ROYAL: Well, then after Paul, then it was Lynn Hang (phonetic), wasn't it?

MR. ROYAL: Because he was the assistant and then we made him a manager. And then, I was chairman of the board when we hired Bob Hilsky (phonetic).

MR. STARR: Okay. He'd been up at Valentine.

MR. ROYAL: Yeah. Yeah, in a small district up there.

MR. STARR: Yeah, that was very early on, as I recall.

MR. STARR: And that was -- as I recall, there was some significant controversy about that, where they was going to move that. And Auburn was also considered as a possibility.

MR. STARR: Tecumseh ended up being the --

MR. ROYAL: Yeah, I was on the board when they built the new NRD building down here in Tecumseh.

MR. STARR: Were there any big controversies while you were on the board, any 11 to 10 votes or --

MR. ROYAL: Oh, I don't remember of anything too controversial. It seemed like everything went pretty smoothly usually.

MR. STARR: And about that time, probably when you were on the board, Dan Watermeier was the chairman of the board for a while.

MR. ROYAL: I'm not sure, either. I think he might have been on -- might have got on just afterward.

MR. STARR: Could be.

MR. ROYAL: I believe he did, yeah.

MR. STARR: What do you think the view of the NRD is now after 40 years ago when there was opposition? What's the view now?

MR. ROYAL: Well, I think a lot of people view it as they don't have the funding to do what they used to do. And too much of the funding is going to recreation, trails and that kind of thing. That's just my feeling that people kind of tell me.

MR. STARR: What do you think's the most important thing that the NRD has done down here?

MR. ROYAL: The most important thing they've done in this immediate area is the Upper Little Nemaha Watershed, the 18 structures that they built.

MR. STARR: Maybe you don't know, but how are they on all of the watersheds? Are they pretty much done with all of them?

MR. ROYAL: In the Nemaha?

MR. STARR: In the whole NRD.

MR. ROYAL: Well, yeah, except, you know, they're currently working on the Duck and Buck Creek structure down there around Peru.

MR. STARR: Is that going to go ahead or what's the status on that?

MR. ROYAL: I'm pretty sure one of them is done and I was to a public hearing here, I don't know, six-eight weeks ago on the other one. It'll get done.

MR. STARR: So, what do you see as the future of the NRD? What do you think the things that are going to happen down the line?

MR. ROYAL: Well, I think funding is going to be a big thing. If they don't have funding, they can't do a lot of things that they'd like to do. I think it's important that we continue getting the funding to preserve our soil and water for the future here.

MR. STARR: And a whole lot of that depends on federal funding.

MR. STARR: A farm bill that never seems to get passed.

MR. STARR: Have you been involved in any other ag activities like the Farm Bureau or any of those types of --

MR. ROYAL: No, I really haven't. I was real involved for a long, long time on the Nebraska Pork Producers, because that was our main income for a long time. But other than that, I'm not really involved in too many other things.

MR. STARR: Are you still in the hog business?

MR. ROYAL: No, we got out in '93 just before the price went down real fast.

MR. STARR: And you were mostly in the breeding stock?

MR. ROYAL: Yeah. Yeah, we raised purebred SPF Hampshires. We sold them -- we exported to different countries and stuff. It was really interesting. Learned a lot and met a lot of people.

MR. STARR: Was your -- you had sons and brothers and so forth involved in that?

MR. ROYAL: Well, my brother was partner with me, but -- and we still are partners. We've been 50-50 partners in the farming since 1955, when we were in high school.

MR. STARR: Very good. Well, I guess, Gerald, I've about run out of questions. Is there any other things that you'd like to say about the NRDs or the conservation movement down in this area or any other comments?

MR. ROYAL: Well, I just hope the younger generation continues it and makes it better than what it is, I guess.

MR. STARR: What do you see in terms of the conservation ethic of the younger farmers? Is is still pretty good or --

MR. ROYAL: Well, I think the majority of them are pretty much conservation-minded, but there's a few that are getting pretty large, and they don't care about terraces. They just care about big fields.

MR. ROYAL: And they don't -- and that kind of gripes me a little bit that there isn't some way to prevent them from going out there and flattening up these terraces that federal money and state money was spent to build up there. Now they're down there just flattening, tearing them out and wasting that money that was put in there years back.

MR. ROYAL: Yeah. Bigger equipment, so they don't want to mess with terraces.

MR. STARR: Well, anything else, generally, you'd like to say or --

MR. ROYAL: Well, only that I'm glad to be a part of it while I was -- when I could and it was a good experience that I'll always be -- remember and be glad that I took part in.

MR. STARR: I've known Bob from Valentine on and he's a good man.

MR. STARR: A lot of good people have been involved in this all over the state, not just down here.

MR. STARR: Well, thank you, Gerald, for agreeing to be interviewed. And I appreciate visiting with you.

MR. ROYAL: Well, thanks to you.